Immortality: Can Science Know How it Works? by Dan Winter 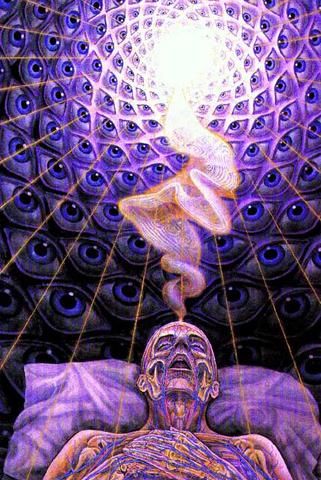 The Visual Geometry of Near Death Experience - Derives from the Electric Field Fold Sequence (Dimensions of Recursive Braiding) in DNA.
By Dan Winter

Join Dans webinar at the Sacred Geometry Fest. to find out more...

THE GEOMETRY OF SUCCESSFUL DEATH:

Millions of lucid dreamers, astral travelers, remote viewers, shaman, and near death experiencers CANNOT be wrong. Your memory and attention and perception are absolutely something which CAN travel and survive OUTSIDE your body. Don't you think its time for physics to tell you what that is? Since your LIFE depends on knowing?

"The amount of coherence in your aura's charge field or plasma- is called your KA. The portion of that coherence which IS projectable and makes it to faster than light speed- is called the BA- like a seed pushed out of a husk or shell.
The process of pushing the aura central charge seed (KA BA)- during death or coherent lucid dream involves a highly specific and known sequence of geometric phase transformations- documented as the 'Kluver Form Constants'

To argue that consciousness is NOT an electric field would be to ignore Einstein's unified field and the oneness prescribed by all spiritual tradition. IF - your awareness and memory field is an electric domain - as is obvious - THEN it must obey some simple rules:

It is exquisitely beautiful to observe how the capacitance and field effect making possibilies of biology - as in fractal golden ratio based DNA and phylotaxis - has ALL been designed specifically to enable this potentially immortal field (what I call DNA radio - what Jung called the collective unconscious ) to GET sustainable - to get radiant. This is identical with the PSYCHOLOGY OF PURE INTENTION: COHERENCE - (perfected by fractality) is the principle which locates the perfectly shareable wave (the grail).

What is profoundly instructive is that these transformations specifically known to be the geometric sequences generally seen at death- are precisely the recursive braid mechanics also present in DNA- AND follow the physics of phase conjugation. In other words- the so called pure intention / phase coherence of entering the world of the collective unconscious - or communion of saints requires specifically charge distribution optimized geometry - the so called ' phase conjugate dielectric/magnetic'.

This then suggests a very specific electrical environment for successful death/birth -the prefect squeeze - enabling plasma distribution- the bed- the place- the magnetic map. As the Hopi and the Cherokee knew- the graveyard must be a plasma map- library card to survival critical ancestral memory as sustainable field effect. 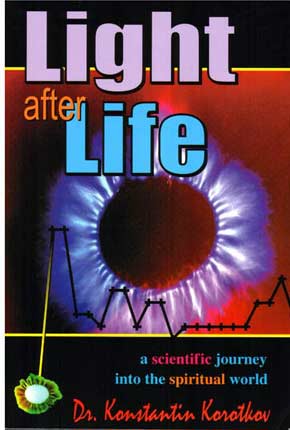 Dr. Korotkov (our Russian scientist friend) pioneered how to measure the fractal charge distributed AIR- where phone calls to ancestors are enabled. Hints from the 'altar' or shem at Machu Pichu. (Generally opposite of the obscene electrosmog of a modern hospital). The same Russian research has shown that the coherence of this aura or charge envelope around the body - as it leaves after death, measurably suggests how we can take memory thru successful death. They measured how the energy order (science would call 'capacitance') of your bodies charge field departs typically 10 and 36 hours after death - just as the 'Book of the Dead says.

In Dr. Korokov's book (left) he does repeated measurements of that charge fields propagation during the death time, by measuring the organization of the charge field using Gas Discharge Visualization (GDV). You can think of it as measuring the size of the Kirlian kind of Aura- in this case - around the fingertip. It is particularly helpful that in the book - the good Doctor K., begins to compare the timing of the release of electrical charge from the body - as indicated by his replicated measurements- with the key times which may be indicated by such traditional - how to die instructions - as Tibetan Book of the Dead- and other religions. Note above- could there be some significance to the fact that often- at hour 10 and hour 36 (around 3 days) after death - there is a charge release peak? Could this relate to the idea of 3 days of mourning?

A successful death would be one in which the essential symmetry (pattern) ingredients of biological charge were able to propagate successfully and coherently - that is without serious loss of information density - through the death experience. This would mean that the energy field of the body were able to sustain itself- without the cellular makeup of the rest of the bodies mass at death. We take seriously the indications that there is often if not usually, significant and measureable weight loss at the time of death ( 4-10 ounces?) - and further speculate that this weight loss - IS associated with the charge density which has been able to leave the body.

This is an appropriate time to point out some principles about biology and therefore it's sustainability - (immortality). Biology exists because charge learned a way to compress into self-organization. Life exists because biology learned how to attract and self-organize electrical charge

This further explains as Ray Moody has so nicely documented from professional medical reports- that the Near Death Experience (like the Kundalini) is an elecrically contagious plasma or charge field-with critical mass- and a propagation geometry. This Bio-PLASMA PROJECTION process explains in part the precise alignment of the tubes pointing from the Great Pyramid to Sirius - and the 'fractal' star mapping of dolmen structures.

The famous Dr. Heinrich 'Kluver' interviews several hundred near death experiencers to have them draw the pattern of space they saw during dying.

There was amazing similarity in the sequence of drawing patterns returning successful veterans of the death process - would record and remember. Clearly it IS possible to make a symmetry map to navigate death.

These were geometric descriptors synthesized from the shapes for passageway seen in common by both near death experiencer and psychadelic drug users. They actually present to our view what may turn out to be a supplement to the "Tibetan Book of the Dead". Specifically, these synthesized archtypal forms may help us shape our conscious focus as we traverse the world between "death and life" and between the dream and waking worlds.

It is survival related to our collected memory to know how awareness is distributed at death, and during shamanic/ecstatic experiences. There are very specific pathways to negotiate in the fractal attractor we call consciousness, in order to take our spin/memory contiguously between worlds.

The trick or key to knowing how to keep our memory whole at death, resides in knowing how pattern is stored in general as wave systems migrate upward harmonically in higher spin symmetry. This is not only geometric abstraction, but practical instruction on how to live forever in memory with no inconvenient discontinuity caused by unconscious dying. As mind is recursive focus among waves, this is the geometric doorway (of Golden Mean foldedness) TO HIGHER DIMENSIONS. This is the only way awareness can distribute itself as spin.

So what the people near death saw was first a vortex cone geometry, then a rotary circle (dodeca spin up donuts) like geometry.

Then they saw this turn into a slinky, tube helix.

Then they saw this long tube narrow (become "massaged") to a point starting a longer vortex form.

Traveling between worlds of inner awareness is exactly like adding spin by geometry to get more symmetry. If you know the map you can get from here to there. This could be handy if you would like to avoid the inconvenience of discontinuity of memory called death. Simply draw through the vortex with you the threads of your spin/memory. The nice part is that the only thing which can come through these nice maps of added spin, is SHAREABLE spin. This means that any time you dwell upon unshareable memories, you are creating death for yourself.

Dwelling on that thought for awhile, realizing that the galactic core may not wish to share much about football rules, leaves us with only pure principle itself to study. There we will gather the spin eternal. Symmetry is a pure principle for example.