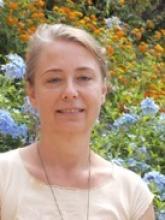 Eva Lenova, is a translator, interpreter, lecturer, author and guide. Her life-long interest in history, traditions, wisdom, art and science of our ancestors and fascination with metaphysics formed a good base from which she was able to start her five years of working and studying with American historian, Vincent Bridges. She supported him in his search for evidence and resources for his books, guided him to places connected to his work in Czech, and interpreted and helped to organize numerous seminars, workshops, lectures and pilgrimages both in Czech and abroad. Their alchemical walks in Prague were rather popular, a number of sacred geometry students enjoyed their magical rituals in the church at Zelena Hora as well as the labyrinth workshop near Cesky Krumlov. An enthusiastic group participated in the winter solstice 2012 ritual in Prague and a bunch of adventurers joined them to their South France tours (Gypsy festival in Stes-Maries-de-la-Mer, Nostradamus, Grail quest and Cathars in October 2010 and May 2012) and to their last public event - Moravian Michael-and-Mary lay line pilgrimage, as Vincent loved to call it.

Eva continues guiding groups of people to power places, leads rituals, organizes pilgrimages and tours to traditional festivals, on special occasions or with special themes such as South France ‘in the footsteps of the Magdalenes'. She is a member of the Czech Academy of Healing Nutrition team writing articles, teaching practical classes and guiding trips.

Past On Location Courses with Eva Lenova